As I was out and about today, I saw a woman whose face and upper body had been badly burned. The scars on her face could not be hidden by any amount of makeup, but the scars on her chest and shoulder could have been easily covered by clothing had she chosen to do so. However, it was a warm, Indian summer day and like myself, she chose to wear something to keep her cool - a tank top. I could not help but stare in awe at this woman. Not because she was scarred, but because I thought she was beautiful! You see, what made me notice her was her laugh. I was not privy to the conversation between her and her companion, but her laugh reverberated throughout the building. It was a hearty, unrestrained, and contagious laugh at that.

I marveled at her ability to laugh like that when she had obviously endured so much pain. It then occurred to me how truly beautiful scars can be. Scars don't form on dead flesh, so if you have a scar, it means that you survived whatever it was that caused it - that's beauty!
Posted by squarepeg78 at 2:52 PM No comments: 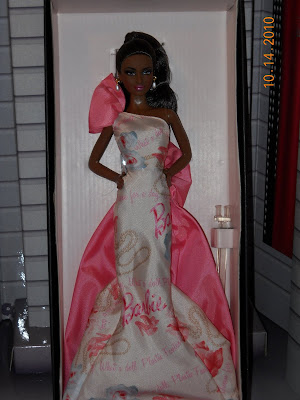 When I first saw online pictures of this doll, I thought she was gorgeous! In the picture, the doll looked dark - almost espresso color and I was excited! I love dolls with really dark complexions, so I immediately emailed my daughter at work. She has a coworker who is an Avon rep, and I wanted to make sure I got one! The doll was ordered and I received her last week.

I was a bit disappointed because the doll is not nearly as dark as I had hoped. I'm thinking the other photographer had the same issue I did - not wanting to debox the doll for the photo. She had a plastic covering (removable) that I removed for the photo, but because she was still essentially in a box, the light did not surround and project a true color representation. She does have the Mbili face sculpt which I love, and her dress is more peachy than pink (another good thing). Oh, and she does have the model muse body. 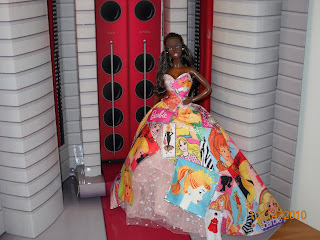 This doll is such an anomaly for me. I don't usually purchase duplicate dolls, but I have triplets of this girl - and today I decide that I don't even like her that much! I was drawn to her because of her dark skin tone and model muse body - I still like those things about her, but I think they distracted me from something much more important. SHE HAS TEETH!
Did I ever mention that I do not like dolls with teeth? Well, I don't. If a doll is otherwise beautiful or fierce, I can turn a blind eye to a bit of white between the lips, but I prefer my dolls with closed mouths. If they must smile, let it be like Mona Lisa.
But I digress. I bought the first of these dolls around this time last year as a Christmas gift for my daughter. Months later, I find her at Big Lots, only with a lovely cloisonne pendant! The doll was priced at less than half of what I paid for my daughter's doll, plus I wanted that pendant, so I purchased the second. The third dolls was purchased simply because I was giddy! During the Barbie Dream sale, she was marked down to a song and a dance. Since I love the model muse bodies for modeling my one of a kind fashions, and she was almost espresso in color, I could not pass up the opportunity to buy yet another.
So......since I now owned 2, I could de-box guilt free - which is what I did this morning. The first thing I noticed after liberating her was those Gawd awful pink lips! I have nothing against pink lips in general, but against a dark skin tone........its just icky! To add insult to injury, there was way too much white in between those pink lips!
Before tossing her into the heap of other "I-don't-want-to-be-bothered-with" dolls, I considered that maybe if she wasn't wearing the pouffy ball gown, I might like her better. I grabbed an outfit from my boutique diorama (still under construction) to see if she looked better more casually dressed. I don't know if she looks better or not! All I can see is pink lips and big ole teeth!
What do you think? 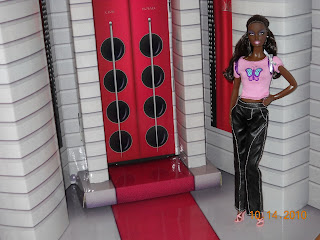 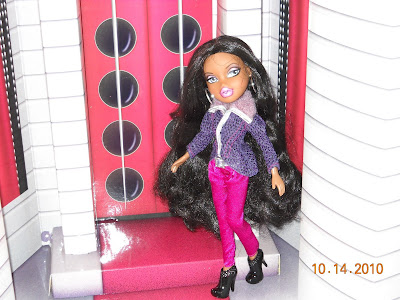 For several weeks many of the fashion doll forums have been abuzz with folks tittering about Bratz' comeback. Many were excited about the dolls returning to their favorite toy aisle, but most were disappointed once they purchased the dolls. Complaints of everything from bad hair, horrific make-up, and boring fashions are more than plentiful. By contrast, there are some (mostly kids) who love them!

I confess that I am not a Bratz collector, or even a fan. A few of them have snuck (sneaked?) into my house over the years, but I took the stance of; "maybe if I ignore them, they'll go away." They didn't!

But any ole way, the past few days have been particularly stressful , and usually when I am stressed, i go trolling for sex ....oops, I meant dolls (really I did!) So I am at Target today strolling through the toy aisles (I told you it was dolls I was trolling for!), looking for nothing in particular. I suddenly see the dolls that are the subject of so much yammering. Supposedly 10-10-10 was the release date of 10 new characters, but Target only had 3. Lydia caught my eye, but she looked just like a Sasha who had been back-handed in the mouth! Sure, all Bratz have bee-stung lips, but this one looked like ....well just look at the freakin' picture! I saw nothing particularly wrong with her make-up, but what is up with the knee length hair? If she ever does get any attention from me, it will be with scissors in hand.

In conclusion, the new Bratz don't move or excite me any more than the old ones did. I really wish I could like them - the $10 I paid for her was a pretty cheap doll fix, except this one came without the new-doll high.........
Posted by squarepeg78 at 3:55 PM 1 comment: