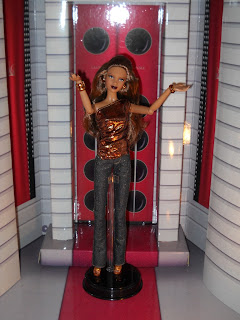 Once in a great while, a doll company hits a home run. Mattel hit it out of the park this year with the new Barbie Basics 2.5. For the uninitiated, Barbie Basics are a line of dolls utilizing various head molds, skin tones, and poses. These dolls had a price point of about $20 and were perfect for customizers and costumers. I was a fan from the beginning and only wished the dolls were more articulated. My wish was granted when I saw pics of the 2.5 dolls last spring - these new dolls would have articulated bodies - yeah! I read a post on a message board that said the dolls would be limited editions and got more than a bit anxious. If the dolls would be limited, I might not get one, so I was delighted to find a website taking pre-orders. I ordered 2 model #8 dolls and they arrived last week. Here she is and I couldn't be happier with her!

Also last week, I read that the next wave (3.0) will be the last of the Barbie Basics - WHY? I know the dolls are popular with adult collectors and are selling. Heck, I have 10 myself, and I am cheap! I realize that companies must continually alter their product in order to stay current and relevant, but when you hit that perfect wave - ride it!
Posted by squarepeg78 at 10:20 PM 3 comments: Links to this post

Pretty as a Princess 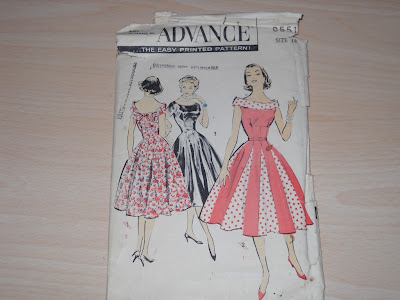 Ever wish you lived in another era? I do - every time I see vintage fashions like these. I almost want to make this dress, but where would I wear it? Perhaps if I could talk my honey into swing dance lessons, but that ain't gonna happen! So this rare, lovely gem that I found in my mother's garage has been listed in my Etsy store hoping to find someone who will use it. 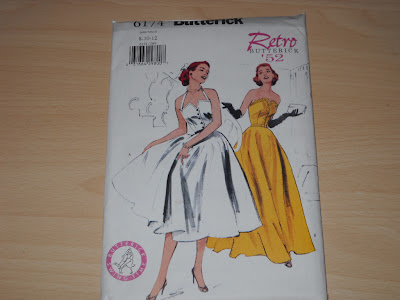 Okay, I confess that I am in love with vintage fashion. My own personal style is kind of Boho chic, but I am always drawn to the uber feminine styles of the 30's, 40's, and 50's. Years ago, when many of the major pattern companies began reprinting past designs from these bygone eras, I bought them. I had the best of intentions, but sadly never got around to it. These patterns have been taking up valuable space in my sewing studio, so its time to let them go to someone who will actually use them.

In addition to the above, I recently uncovered a box of patterns that had been stored in my mother's garage for the past 40 years. These are original patterns from the 50's and 60's! I thought it might be fun and interesting to share some of these.

The pattern pictured is a Butterick reprint of a pattern from the early 50's. Can't you just envision Marilyn Monroe or some other Hollywood starlet wearing it? The pattern is in new condition - uncut and factory folded. If interested, it is listed on Etsy: 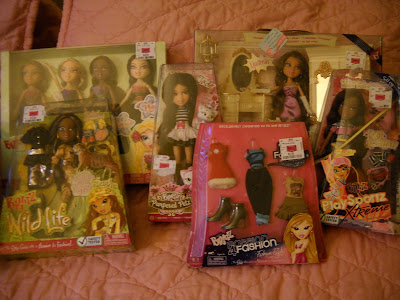 I didn't like them ten years ago when they first debuted, and I can't say I like them any better now, so why do I have so many? Though Bratz are a tiny fraction of my fashion doll collection, there are still to many considering my dislike of them. I bought one maybe eight years ago out of curiosity. I kind of liked their brassiness, but the out of proportion bodies and amputee feet were just too odd for me to take seriously. They did however, have some really cool accessories and playsets which I loved! I am still kicking myself for not buying the sushi bar when it was still available at a reasonable price. I did get the coffee bar and phone booth for my "real" fashion dolls, but the phone booth is a bit too short for the 11 - 12 inch gang to fit, so they just pose around it.

I still have no answer as to why no fewer than a dozen of these girls have taken up residence here. My best guess is because they were cheap! All of the dolls pictured were purchased for less than $10 and all were purchased in the last 6 months. I bought them for either their accessories, or because I want to steal their clothes for my Monster High dolls.

So how do you feel about Bratz? Do you like them? If you are like me and don't; do you have any? How many and why?
Posted by squarepeg78 at 7:21 PM 3 comments: Links to this post

What happened to Esme? 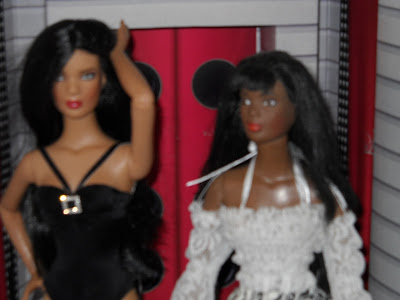 Esme is/was Tyler Wentworth's African American friend, but I am starting to wonder what happened to her! Granted, I am not an avid collector of 16" fashion dolls, since they require too much room to display - way more than 11-12" Barbie types. A few of them however, have found their way to my house. I purchased my first Esme about 9 years ago and she was a lovely brown-eyed beauty with a chocolate complexion. Although she was quite pretty, she had limited posability - her knees would bend, but not her elbows or wrists. I wanted one with more articulation, but kept putting off the purchase in favor of other dolls.
A couple of weeks ago, Tonner Doll Co. had an incredible sale and I thought it time I bought an articulated Esme - this one had wigs too - woo-hoo! Upon her arrival, I opened the box with great anticipation, but was soon taken aback! I had to check the packing slip as will as the box label to make sure I had ordered the right doll! Gone were the pretty brown eyes, and in their place were grey ones! Even more perplexing was the skin tone - now a medium tan, instead of chocolate brown. What happened? Don't get me wrong, the doll is still quite pretty, but she looks nothing like her "old" self. In fact, it looks to me like the face mold is even different. 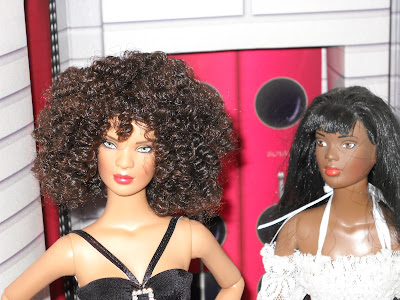 I have attempted to blacken her up a bit by allowing her to wear the Moxie Teenz afro wig. I think it looks great on her, but she looks biracial at best. What do you think?
Posted by squarepeg78 at 5:43 PM 5 comments: Links to this post

I Need a Name! 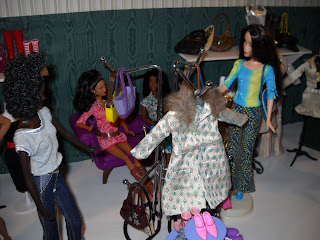 This diorama is a work in progress. Eventually, I hope to showcase my original fashions for Barbie, Silkstone, and Integrity/Fashion Royalty, Liv, Moxie Teenz, Monster High, and other fashion dolls. 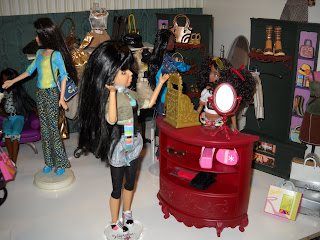 Right now, it is just stocked with random pieces to make it look like the girls are shopping. The challenge I am now faced with is an appropriate name for the boutique. 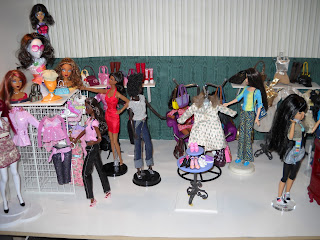 Since my name is Denyse and I am known online as Squarepeg78, I considered naming the boutique "D Squared" but I believe there are fashion designers for humans (twins) who go by that name. I don't want to be accused of copyright infringement, so I am asking for your help. Please leave a comment with your suggestion. When enough suggestions have been received, I will set up a poll. There will be a prize (don't quit your job) for the person who submits the winning name - fashion doll related.
UPDATE: What I meant by the previous sentence was that the prize would be "fashion doll related". The name of the boutique doesn't necessarily have to be. I really want the name to reflect quirky haute couture, with a chic, Bohemian twist - if there is such a thing. Also, I am revising the "fashion doll related" prize since some of you are out of the country and shipping may make sending the prize a bit costly. Soooo....the person who submits the winning name, will receive an Amazon gift card instead. Now keep those suggestions coming......please!
Posted by squarepeg78 at 10:52 PM 4 comments: Links to this post