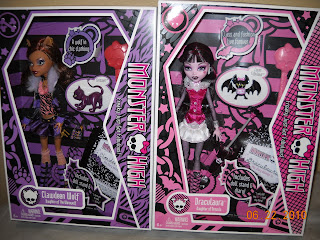 A few weeks ago, I starte reading about, and seeing pictures of Mattel's soon to be released, Monster High dolls. I was immediatly smitten and pre-ordered 2 of the dolls from Angelic Dreams' website. On the website, it was noted that the dolls expected ship date was TBA (to be announced). That was a minor consideration for 2 reasons: First, because I had ordered dolls previously from AD and had no problems, I thought it safe to assume they would ship the dolls soon after release. Secondly, All of the information I had read online said the dolls were scheduled for May/June release, so again I made an assumption that AD would ship my dolls sometime in June.

Any ole way, a few weeks passed and other people started posting online that they had received their Monster High dolls, or had purchased them in their local stores! Of course I am wondering where mine are! I check the AD website and now instead of a TBA ship date, they have Sept/Oct listed as the estimated ship date!

When I could take it no longer, I go to my local TRU (Toys R Us) and sure enough, the dolls are there on the shelf! Not only are they in stock, but they shelf sticker lists the price at $19.99 whereas AD charged $24.99 plus shipping. So now I'm thinking that I have paid $10 more (I ordered 2) to be the last to get my dolls! I considered cancelling the order, but Angelic Dreams has some incredibly absurd terms, First of which, they will charge you 30% of your order as a "restocking" fee! Not only do I believe that to be unreasonable, but how can they justify a restocking fee when the items are not in stock to begin with? Secondly, they will not issue a refund, but will only give store credit. This is unacceptable to me because I do not envision ever doing business with this company again and will not recommend that anyone else of my acquaintance do so. Of course I fired off a strongly worded email to Angelic Dreams - to which I have received no reply, but all I really want are those adorable dolls! So I proceed to whine and vent to any and everybody who would listen. Finally my dear daughter got tired of my tantrums and purchased one from TRU as a Father's Day gift (hey, I raised her by myself for most of her life, so I guess she thinks me entitled). I was indeed a happy camper with the adorable Clawdeen Wolf! 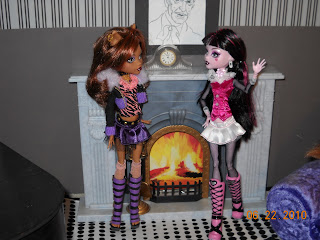 Today I had to go to Walmart to fill a prescription and while I was waiting, took a stroll through the toy section. Lo and behold, even Wally World had the dolls in stock - at $17.99! Though I tried to resist, Dracu Laura flew into my cart! So now I am the proud owner of Clawdeen Wolf and Dracu Laura. When the AD order arrives, they will have plenty of company...... 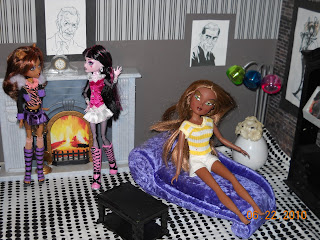 Here they are conspiring to get the "off the Hook" chick off the chaise so that they can watch horror movies on tv.
Posted by squarepeg78 at 7:08 PM 2 comments: Links to this post

I purchased this doll last spring at either Big Lots, or DD's Boutique and paid $4 or $5 for her. She was the only one of her kind on the shelf and her box was trashed, but I still thought she was cute. Shortly thereafter, she was packed away with the rest of my dolls in preparation for the move to the new house. She has been imprisoned in a large cardboard prison with many other dolls until this week when I was determined to parole them all. 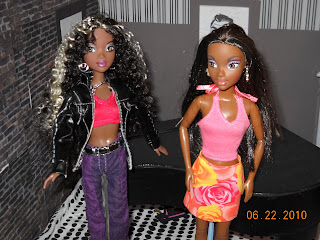 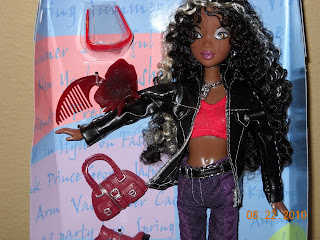 The packaging insert, accessories, and of course the doll all look like My Scene imitations and are actually of really good quality considering the price. I can only assumed that the box was discarded since it was in such bad shape, so now I am left wondering who she is, or what company made her. She has the typical My Scene belly button body with click knees, over-sized head, and big clunky boots on otherwise small, Barbie-size feet. Her only flaw is that her hair is thin. It is a good thing that it is so curly, otherwise I am sure that her scalp would be visible in spots.

Does anyone have a clue who this doll might be, or the company that manufactured her? The last picture shows her with My Scene Jai for comparison. 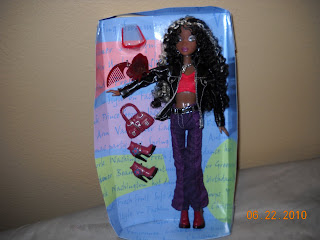 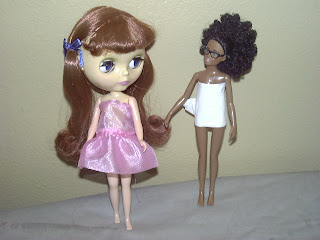 I don't remember exactly when I acquired these dolls. The months of February and March are pretty much a blur. Caring for my mother with dementia, going back and forth to the hospital to see my dad and consult with doctors, and shuttling relatives to and from the airport occupied most of my time. Somehow, these dolls managed to present themselves in the midst of the chaos!
Blythe has always been on my "must have" list. I wanted one as a child, but her production was ceased before I got my hot little hands on one. For the uninitiated, Blythe's eyes will change color and position with the pull of the string in the back of her head. As a kid, I thought that was the coolest thing - still do! I was delighted when I learded that Ashton Drake was going to make reproductions a few years ago, but I was not prepared for the price. Lukily, I found her on Amazon a few months ago at a price I could afford. Her arrival was a tiny glimmer of light during my darkest days watching my father deteriorate before my eyes.
The doll on the right (with glasses) is Calista, and she is a new girl in town. I'm guessing that MGA was preparing for the demise of Bratz dolls and released the new BFF line of dolls almost concurrently with Mattel's lawsuit victory. I believe there are 4 characters, but Calista seemed to have the most personality to me. I like her, but I wish she had more articulation. Besides the normal shoulder and hip joints, her ankles are jointed - weird? How about knee and elbow joints folks! Those wiggly ankles will only excite those with a foot fetish. Anyway, she is cute, I like her, and she is here. She and Blythe have been laying around in the buff for a couple of months at least. I wanted both to have new wardrobes, and I so desparately wanted to get my mind off my family issues, so I tried many times to design something for them. I got as far as drafting basic slopers for them, but never actually made anything. I grabbed what was handy to make them presentable for this photo shoot.
Posted by squarepeg78 at 11:34 AM 1 comment: Links to this post 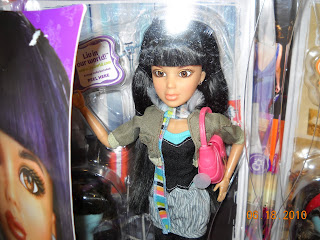 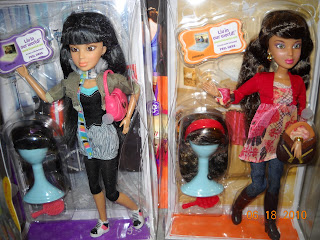 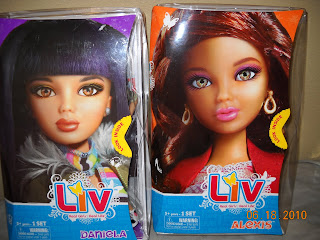 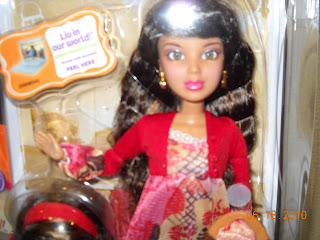 Yes, I am a doll collector. I have been collecting for over 20 years and until recently, my hobby was well under control. Well, life happens and I now find myself more stressed than ever before. As my stress level increases, so do the number of dolls in my collection!

Last February, my father was diagnosed with terminal brain cancer and passed away 2 months later. I became the primary caregiver for my mother who has Alzheimer's disease. I share the same birthday as Barbie (March 9), but because of all that was going on, I didn't really have an opportunity, or desire to celebrate. I did however, purchase a few new dolls. Liv dolls by Spin Master were about the same size as Barbie, but with bigger heads. They also have glass eyes instead of painted, and are fully articulated. I purchased the Hispanic, Daniela and the African American, Alexa because they were the cutest of the 4 characters. I was a bit disappointed in Daniela as her picture on the box front was much prettier than the actual doll, but I kept her anyway. The dolls are bald, but 2 wigs are included with each doll. These dolls are sure to be de-boxed, played with, and displayed in my dioramas soon.
I also purchased a couple of Juku Couture dolls, my very first Blythe, and a Moxie doll during the month of March, but I haven't yet taken pics of them yet.
Posted by squarepeg78 at 10:01 PM 1 comment: Links to this post