Too Much of a Good Thing!

Almost 3 years ago, I was bitten by the Monster High bug. I had read articles prior to the dolls' release, and could wait to get one in my hot little hands! Previous posts explain my frustrations in purchasing those first dolls, but once I got them, I was smitten! They had almost everything I look for in a doll - uniqueness, articulation, small size, and a storyline! It wasn't long before they had a line of cool accessories, and I thought I must have them.....Cleo's bunk beds, Lagoona's Hydration chamber, Coffin Bean playset. 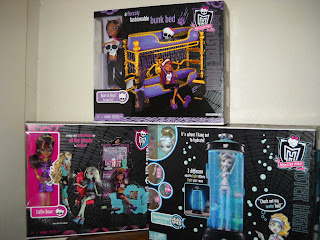 I was quite happy with my first dolls - Cleo de Nile, Clawdeen Wolf, and Frankie Stein, but soon, new characters started cropping up faster than I could keep up! I would see pics posted on line, then run out to local Walmarts, Targets, and TRU in search of them.....many times in vain! Websites showed the dolls sold out, and the only place they could be found was Ebay at triple the retail price or more! Whenever I would find a new character locally, I would buy it whether I liked it or not. I felt like I could use them as bargaining chips to get the dolls I really wanted. 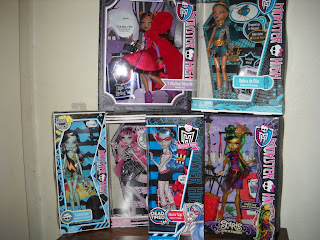 Then came the Create a Monster sets that allowed you to build your own monster, fashions, more characters, and a bunch of other stuff - I couldn't keep up! 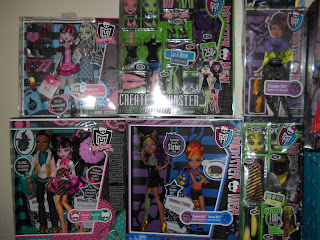 It wasn't long before Monster High dolls and "stuff" had all but taken over my doll room. My dioramas and other dolls became hidden by MH boxes. It got so bad, I no longer wanted to go in there to play - there was just no room! It got so bad that the only time I opened the door was to put in another MH box, and quickly shut it before my inner voice asked the inevitable question: "What are you going to do with all of this sh*t?" A few months ago, I came to my senses (sort of) and came to the conclusion that it was time to part with some of it. The thought of me ever being the subject of an episode of Hoarders surrounded by mounds of Monster High stuff, and peeing in a bucket was more than I could bear, and enough to get my behind in gear! I took a deep breath, went into the MH...I mean doll room, and started sorting. I listed many of the dolls I had duplicates of - not exact duplicates, but duplicates of the same characters. I had Lagoona in the Hydration set, so why would I need another? These items were sold on Ebay for a nice piece of change, and I was happy....sort of. Though I did reduce the MH stash considerably, I still couldn't play in the doll room! At any rate, the holidays were upon me and I had other things to think about - I would figure out the MH problem later. Well, we are now 2 months past the holidays, and the time has come....yet I still don't know what to do! In going through what's left, I realize a couple of things: 1. I've spent way too much money on this madness. 2. I can't decide what to keep! I want MH to occupy but 1 2'X4' space in the room. 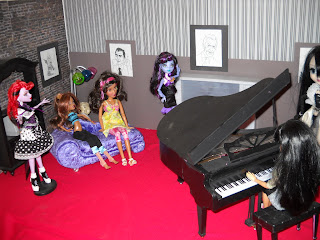 with no boxes taking up space. Today, I am tempted to just list everything still NRFB on Ebay. If you are a MH fan, would you buy it? Would it be more prudent to list things individually? I need help!
Posted by squarepeg78 at 3:01 PM

I always limit myself to a number per doll line. With Monster high, I said only one of each character I REALLY like, so I only have three, but am considering buying like 8 or so more! I would buy some NRFB dolls as long as they aren't crazy after market prices I see on ebay.

Wow. You really got bitten. :) I'd list them on EBay with a low starting bid and see what crops up. Seems like the ones that start out low really get bid up - depending on what they are, of course. I think I'd also try selling pets individually. In fact some of the pieces you could sell individually and perhaps do better. Just thoughts.

Yikes, this is what I have to look forward to! Thanks for the warning.